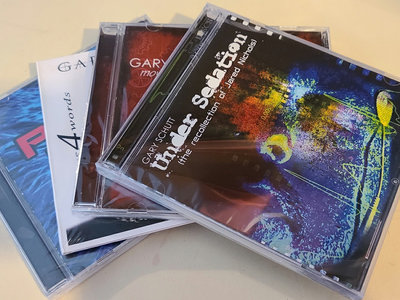 Four CDs we have in stock are overstocked. We'd like to unload some in a bundle. This includes Gary Schutt "Under Sedation" (2 CD set), Gary Schutt "Moving Parts", Gary Schutt "Loss 4 Words" and Panic Fire "Chrysalis". The Panic Fire album is still basically a Schutt album, just with a band name. All fantastic hard rock albums and considered all to be some of Schutt's best work, especially "Under Sedation" which is a one-man rock opera, like Operation:Mindcrime, The Wall, or Scenes From A Memory. Get the bundle for a special price, and a few goodies while supplies last.
That's FOUR albums but FIVE CDs!!!!!! You save almost $30!

ships out within 4 days
edition of 20